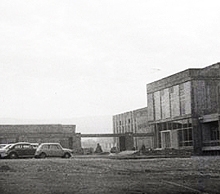 Middle East Technical University is founded under the name of "Orta Doğu Yüksek Teknoloji Enstitüsü" (Middle East High Technology Institute) on November 15th, 1956 to contribute to the development of Turkey and Middle East countries and especially to train people so as to create a skilled workforce in the fields of natural and social sciences. "Arrangements and Procedures as for the Foundation of METU, Law No 6887" was enacted on January 29th, 1957. Finally, "Foundation Act No 7307", which sets forth the particular standing of METU and describes the conditions rendering METU as a juridical entity, was enacted on May 27th, 1959.

Middle East Technical University's presence brought about new methods and introduced innovations to Turkish higher education system manifesting METU as a pioneer of modern education nationwide. In its earliest years, part of METU was located in a small building that belonged Social Security Office of Retirees at Kizilay's Müdafaa Street and the other section was located in the barracks behind the TBMM (Turkey's National Grand Assembly). In 1963, the University moved to its current campus location which is the first university campus of Turkey.

The language of instruction at METU is English. METU School of Foreign Languages takes the initiative to teach English to students at Preparatory School.

Owing to the quality academic education that emphasizes merit and excellence in scientific, cultural and intellectual studies as well as owing to the accomplished and qualified METU graduates, the University has become one of the distinguished and respectable institutions of Turkey. Today, the University is proud to employ about 791 faculty (professors, associates professors etc.), 225 academic instructors and 1.273 research assistants. It is a great pleasure to offer education to over 28.000 students. The total number of the alumni now is above 120.000.